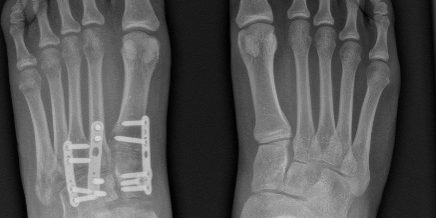 In this 4th blog in the Foot and Ankle series, our expert Foot and Ankle surgeon Mr Tim Sinnett explains the significance of injuries to this complex anatomical area  of the foot, and explains why prompt assessment and specialist management is important.

The term ‘Lis Franc injury’ refers to an injury at the junction of the midfoot and the forefoot. It was first described in the 18th Century by the French army surgeon Jacques Lisfranc de St. Martin, He noticed these injuries in cavalry men who fell from their horse but got their foot stuck in a stirrup. As you might imagine, the foot twists at the junction between the middle of the foot and the long bones (metatarsals) of the foot, causing a fracture.

Who sustains these injuries in the 21st Century?

Whilst it is still seen in horseriders, It is now far more common to see this in someone who falls from their motorbike or sustains a direct impact to the foot. They are also seen in sportsmen whose foot gets stuck in a contact situation, often with the toes fixed to the ground. Depending on the amount of energy involved in the accident, the severity of the midfoot injury can vary greatly. Failure to recognise these injuries can lead to chronic pain and early arthritis. Missing a midfoot injury such as this is a common cause for litigation in the NHS.

Why are these injuries commonly missed?

The foot is often very swollen in the inital stages, meaning clinical examination is difficult. Interpretation of foot X rays is not simple, and in the trauma situation you may be assessed by a clinical who does not frequently read them. It is therefore very important that if you suspect you have injured your midfoot seriously, that you are seen by an experienced Foot and Ankle expert.

Why are the bones of the midfoot important and what is the consequence of injury to them?

The bones of the midfoot form an arch from the inside to the outside of the foot. Together, they form a stable construct akin to a Roman arch: 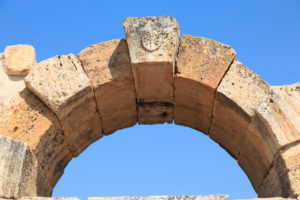 Disruption of the arch can lead to instability which in turn leads to pain. In the short to medium term, disruption fo the arch lands to collapse of the midfoot and early disabling osteoarthritis.

What are the different types of midfoot injury?

The severity of the injury is normally related to the amount of energy that goes through the midfoot. This can range from a complete midfoot dislocation to more subtle injuries. Below we can see examples of both:

This Xray is of a young man who was knocked off his moped. There is a complete dislocation of the midfoot. This is a surgical emergency.

These are comparative foot X-rays of a young rugby player who twisted his foot during amatch. There is widening visible between the base of the 2nd metatarsal and the medial cuneiform. Because of his age and high level of sport, this patient underwent surgcial fixation. 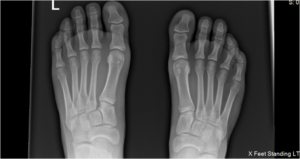 Will I need an operation?

If the injury is demonstrated to be unstable through weight bearing X-rays then stabilisation or fusion is recommended. Patient factors will have to be taken into account such as co-morbidities and activity levels. The type of surgery will depend on the injury pattern. Extensive medical research supports both stabilisation and fusion surgery for severe injuries. Below you can see how the injuries mentioned above were managed:

The severe midfoot dislocation was stabilised with emergency surgery. Two weeks later, once the swelling had subsided, definitive stabilisation was performed. 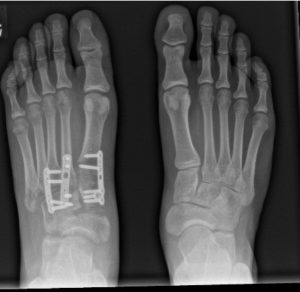 The rugby player underwent stabilisation with a single screw across the Lis franc ligament: 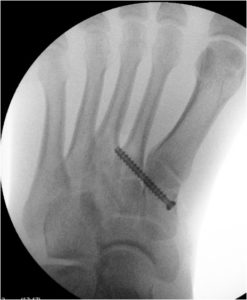 If you sustain a midfoot injury, contact our Foot and Ankle specialist for an expert and experienced opinion.

Radial Head Fractures: A Case Based Discussion of this Complex Injury
25th April 2021